I strongly believe that if realm is not winning - realm should recieve less (or zero) rewards and efforts of winning and pushing campaign one should be rewarded.
That said I would have done this:

This system will only reward realm that pushed campaign and winning, will keep people interested in something but t4 pairing and will reduce "participation" reward for those who does not make efforts to actually win.
Minmaxing tool Renown Point Calculator Epic quest weapon appearence
Top

Yaliskah
King of Nothing
Posts: 1809

Rockalypse wrote: ↑
Thu Sep 19, 2019 1:53 pm
I strongly believe that if realm is not winning - realm should recieve less (or zero) rewards and efforts of winning and pushing campaign one should be rewarded.
That said I would have done this:

This system will only reward realm that pushed campaign and winning, will keep people interested in something but t4 pairing and will reduce "participation" reward for those who does not make efforts to actually win.

Even i share this point of view, i must remind :

a-If you don't reward losing side (because it is the losing side), player will join the winning one (cross realm, path of least resistance...).Same if you "punish" the losing side.

So, you maybe solve a problem, reinforcing another one. Invader is the subject, but keep in mind someday, you will have to add in the equation Warlord and Sovereign too. If you put all currencies in ORvR, then fort and cities become pointless and yes, in the end a single zone should be enough

ANY PROBLEM WITH STARTING THE GAME? CLICK HERE
Top

Which losing player expects to have a reward?

failing to kill a boss on pve doesn't give a reward.
losing a fight gives no reward.
Top

Here is the problem i see with fort rewards and why people choose to lose.

It is not like our keeps in every other zone. The losing side still can roll and get a gold bag in all other T4 zone locks. But in forts all you get is 4 tokens for a loss with zero chance to get a gold bag.

Usually when one side is out matched you will get people that give up and just accept the fact they are getting 4 medals and stop trying after losing a few times. This is a problem because in forts numbers are in favor of the attackers already so if a hand full of people quit trying it makes pulling off a win even harder. The fact that they might get a few more medals if they get a bag or a piece of invader for squeaking out a win is not enough of a reason for some to keep trying and they just take the 4 medals.

Possible way to fix this is make it like any other keep take, no limits on who can be there, no auto ram you have to actually ram the door (no supply running you can just spawn ram), holding BOs Increases or decreases inner door durability and Lord difficulty (help split up zerging). If defenders hold all 5 BOs for more then 10 minutes after inner door has gone down the lord heals 5% every minute if attackers hold all 5 BOs for more then 10 minutes the lord starts to lose health 5% every minute. If lord sits at 100% health for more then 30mins after inner door has gone down the pairing resets. Have invader medals drop from kills and come from gold bags if you are high enough RR. Instead of forts being the only way to get invader it would now give bonus xp/renown/inf for winning side for say 2 hours. Just spit balling an idea.
Trismack
Top

Which losing player expects to have a reward?

failing to kill a boss on pve doesn't give a reward.
losing a fight gives no reward.

Rewarding winner will increase the xrealmer. Just watch what happened in last week. Destro starter to have more and more wb leader, started to win fight and from being ALWAYS zerged now we are zerging because order swapped to the winning side to get carried
Top

Now, i guess both faction would see some "let them take praag!" announcement

. See my point ? It wouldn't solve the issue, just moving it in another place.

The real question is : " What could motivate a losing faction/player to go beyond ? "

At first glance this statement is correct, but I disagree on this part if I consider how campaign dynamic works.
Changing the dynamic from Midzone is easier because each side has the same amount of keeps to push to get to the zones that reward invader tokens. (and 1or2 failed sieges are enough to turn around the dynamic)
Pushing from your defensive endzone into the enemy fort is 3x more zones than the attacking side (1 zone) has to do, so people fall in the mindset "if we push the defensive endzone, we need to push midzone AND the enemies endzone to get fort" which is very unattractive from a reward perspective.

Syphoning rewards out of the fort into the zones is the best way to make the campaign more complete and playtime investment friendly. Fort should still be the "jackpot" but playing the T4 campaign is a strongly connected part of the actual fort. 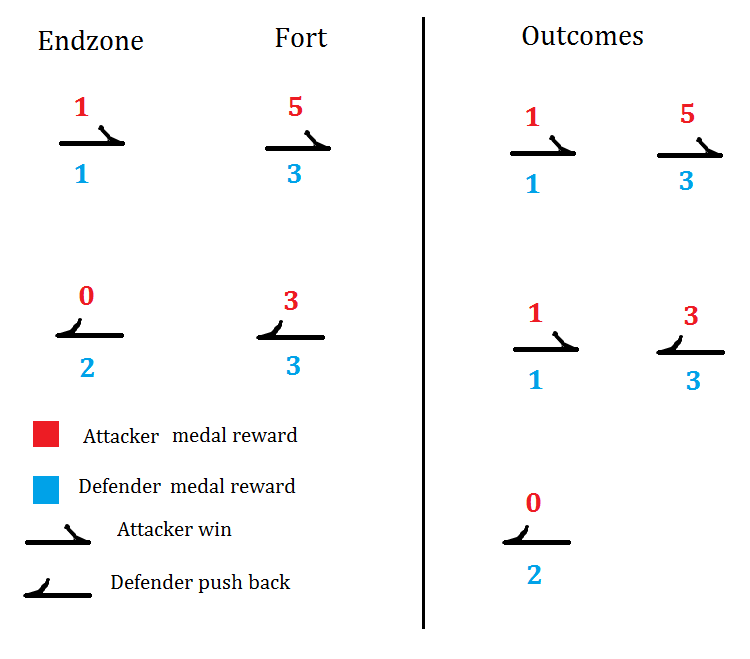 The overall medal payout for the individual who enters fort is the same (if they were part of the previous campaign, intended)
The overall medalpayout for peole who play campaign but can't enter fort is increased because of spreading the rewards wider.

The only actual increase is in pushing back an endzone because of a few reasons:
a) you are at a dynamic disadvantage because you got pushed out of the middle zone in the first place which usually means the enemy outnumbers you and you need to grind their numbers down until you are capable of pushing back
b) 1 medal is not enough to be social and defend the keep because 100 fort defenders get 400 medals for the realm which means youd need 400 endzone defenders to have the same realm payout.

I think the biggest mistake that was made with invadermedal design is that is a too strong currency.
Rewarding medals for kills or across the whole campaign makes the farm too easy.
This could be solved by introducing a subcurrency "invadermedal fragment" which drops from high rr players.
This subcurrency would make it easier to rebalance rewards over the whole campaign as well.


p.s: Only rewarding attacker promotes realmzerging. Imo it is way better to reward pushing against the current campaigndynamic.

Winning a regular zone lock is 90% numbers advantage, 10% skill. At least with forts theres a greater chance for a more even fight.

Yes you dont get rewarded in PvE. This ain't PvE. BS bosses dont suddenly spawn more NPC mobs halfway thru your fight or get increasingly more difficult after every wipe. Apples and oranges, people. Dont bring in that argument.

If anything, increases capturing of your last stand zone pairing to 2 invaders. Or 1 invader and 5 vanq medals. Make it really worth it to fight off the zerg when one side goes hog wild and runs over your side. I'm not sure what the solution is right now. I've been digging the incremental (but slow rolling) changes to orvr mechanics, but theres always room for improvement somehow.
Detangler - 40 DoK armor talisman farmer
Deetangler - 40/7x Chosen tankbot
Deeetangler - 40/6x Zealot healbot
Detanglerr - 40/xx Witch Elf boredom killer
Top
Post Reply
42 posts