Here you can post addons, or anything related to addons.

Forum rules
Before posting on this forum, be sure to read the Terms of Use
Post Reply
32 posts

have some questions:
* where can I find custumization/config?
* tried to make a macro with /wlh to save a button, did not worked. Is this the way to do?
* can i change position in UI?

many thanks / Danke, saludos
Clau

Is there a list of icons somewhere to use here: local wlhMessageStart = "<icon49>"; ?

Thanks so much for an amazing mod. This is a great community resource.
Top

I have seen those countdowns, good stuff.
https://www.youtube.com/watch?v=UIAMfFyXT9c
Top

Too bad we have no low tiers for practice leading. Its big resposibility to not crash 24 pug man on a shields of guild premade WB:)
Top
Ads

have reworked some addon's code and added some options for more customization:
- reworked wlhMessages object, so it should be easy to add new buttons
- added options to change button and text colors (you can leave fields empty to use default colors)
- added options to add specific icons in the beggining and the end of each message (same with default icons)
- added more buttons and regrouped them
- some code tweaks 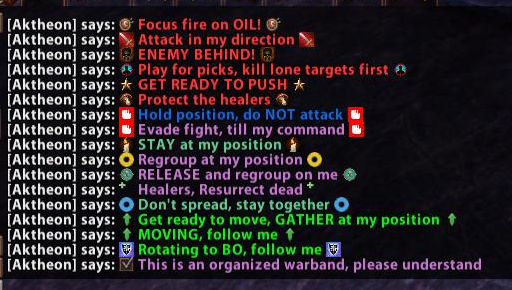 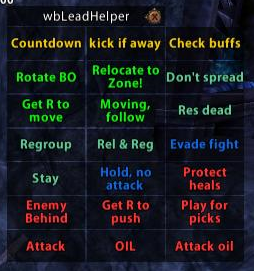 to update addon, you'll have to replace code in

I am already working on the next version and already added button text colors, mainly to highlight buttons you have to find quickly and make submenus better recognizable. Changing the icons in general was already possible. Not being able to change icons per button was a deliberate design choice to make it easier to recognize which messages belong to what person, when multiple people use the addon. Besides that, personally I think having too many different icons makes it harder to follow the chat but that might just be me.

I am hesitant to add more message. The next update will already add two new button submenus, I don't want it to get too big. At least not by default. I made it configurable (more or less) for a reason, so people can add more if they need it (like you did).

Regarding your wlhMessages rework. Funnily enough that looks similar to what I had before.

I changed it back to a flat structure after noticing people having problems changing a too complex version of it. So non technical people have it easier to add buttons on their own.

Thanks for your changes, I definitely appreciate you finding the addon useful and changing it to your liking. I hope you understand that I will not merge your changes for now cause I already implement some of it myself and the above reasons.