Ask for in-game support. Bugs go to the Bug Tracker.

Forum rules
READ THE STICKIED THREADS BEFORE YOU POST IN THIS SUBFORUM.

The RoR staff do not apologize for flippant or otherwise objectionable responses made to posters who refused to read the stickies before they made a post. Save our time and yours by reading the stickies first.

Looks definitely too high to me.
Gear looks normal though. Does he some sort of weird buff? From the Screenshot I see its Anroc but he might have some bugged murderball buff or something.

In either way, this belongs into the bugtracker and some GM will probably close it.
Just report it there if you feel something is not legit.
Kimy - KotBS/Chosen of Orz

There is indeed some weird damages going around, i posted this screen on the bugtracker 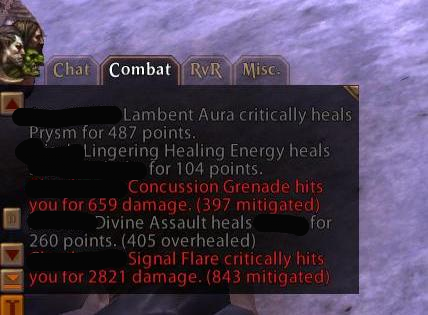 Tooltop of signal flare shows 1225 damage over 21 seconds, one of the ticks critted for 3600.
Top

well if it considered critical at least

Just interesting - is it normal for WL to dealt 2.5k damage from single auto attack hit?


bloodi wrote:There is indeed some weird damages going around, i posted this screen on the bugtracker

M2 maybe - cos Conc grenade hits too much too?
Bretin: "destru classes are in general better for solo play"

wao revenge proc can arrive to do these damages?

Tesq wrote:wao revenge proc can arrive to do these damages?

Revenge: If your War Lion is killed, you will go into a rage and deal 50% more damage for 10 seconds.

ok now it's time to use your brain: If your War Lion got killed, you automatically lose the crit damage provided by Pack Synergy.

and now don't get me wrong, the WL has no ability which does 1000 non-crit it's just an example!

SilverMF, Penril and Tesq Did you really thought that is normal?? And you guys suggesting balance and order nerfs....

Users browsing this forum: No registered users and 8 guests