Forum rules
Before posting on this forum, be sure to read the Terms of Use
Post Reply
196 posts

Natherul
- Updated the ab changelist with the changes of todays patch.

Squig Herder
Natherul
- Backend work for SH rework.
- Horned Squig is now castable while moving while in Squig Armor and have its cast time reduced by 50%.
- Horned Squig now takes less damage from AOE if in Squig armor.

Torquemadra
Values will be subject to change depending (on my whims... -ahah- and) how it ends up playing out. 15 point ability - Outta My Way! (New, not a morale 4, experimental placement of ability at top of tree) Moved M4 - Wind up da Wind Up Da Waaagh is now core at 40, activating it puts other morales on a 5 minute cooldown.

Squig Armour stat boosts will now stack with potions.
Squig Armour Reduces the CD of Horned Squig to 15s, its cast time to 1 and enables it to be summoned on the move.
Tactic - All By Meself - Now additionally reduces the cooldown of Squig Leap by 10s.
Fasta Squiggy - Squig Armour Mount - Available at every good Mount Vendor. Blackguards passive Exile cd reduction if using a Great Weapon has been removed.

Ability - Get Down! - This 9 point ability has been removed.

Ability - Halt, Fool! - This new 9 point Path of Malice ability costs 30 hatred, has a 20s cooldown, is a 3s KD, a 3 second snare (runs concurrently) on enemies and gives a 5s speed buff to self and if Exile is used while this buff is active it will be have its cooldown reduced by half. Uses Get down KD as carrier as theres a animation flaw I have to correct. 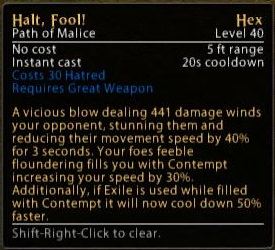 Ability - Rebounding Hatred - This new ability is a 20s channel which gives the caster 50% boost to Parry/Dodge/Disrupt, requires Great Weapon. Replaces Blast of Hatred as the 15 point ability in the Path of Malice. 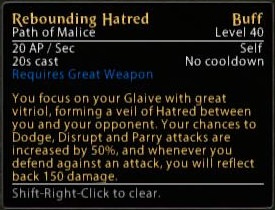 Ability - Blast of Hatred - moved to core, obtained at lvl 40, activating this ability puts your other morales on a 5 minute cooldown. 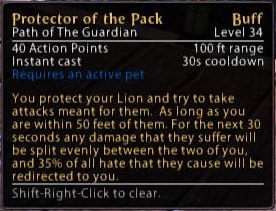 Morale 4 - Whirling Rage moved to core, obtained at lvl 40, activating this ability puts your other morales on a 5 minute cooldown.

- Chosens of Grimnir have recovered their abilities and Damage power

Great adjustment for SH finally!!!(i dont play one) but on the other hand; Nerf s\b BO with 3hit Combo ouch and buff order.....

Will see how it goes.. i already have my idea tho
]
Top

So... bg's got wall of darting steel?

No. They got Rebounding Hatred.

15 point ability in their Offensive tree, which means you have to give up Force of Fury, AoE snare, Anger Drives me, Self-heal, and Elite Training to purchase in the go-to Malice spec.

It allows the 2h BG to function as an Offensive tank in both group and WB play (potentially <--) without being blown up. Similar to the 2h Khaine SM!

Ability - Shadowstep - A replacement 15 point ability in the assault tree. This ability works as a gap closer. Its a 2s cast, 20s cooldown ability which additionally grants you a 10s buff which currently grants 50% armour penetration, 15% parry/dodge/disrupt defences and 25% AA speed.

OMG! I've never been this excited in my life

Genisaurus wrote:You are not entitled to Best-in-Slot gear just because you log on.

Can't say i'm happy with these changes (just a measly opinion felt from a fan of the game).....The Black Orc change should at least come with better avoidance tactics, rolling a 2hander is death on a BO unless geared and high rr and carried. The squig changes (though very fun) only gives destro another melee which we don't need, we need more range damage and range cc that stops order moving not just lame disarms and silences. Feels like you are keeping us in melee, especially with the 25% chance at runaway only triggering once every 30 hits or so.
CRUDE big boss! (Scrubs can lead too)
Yardpig- Black Orc
Top
Post Reply
196 posts

Users browsing this forum: No registered users and 12 guests