Forum rules
READ THE INSTALL GUIDE BEFORE YOU POST IN THIS SUBFORUM.

The stickies exist to handle common queries. Save our time and yours by reading them first.

NOTE! Make sure you install wine for your your distro first (apt install wine and run winecfg for once) - for Lutris to work correctly 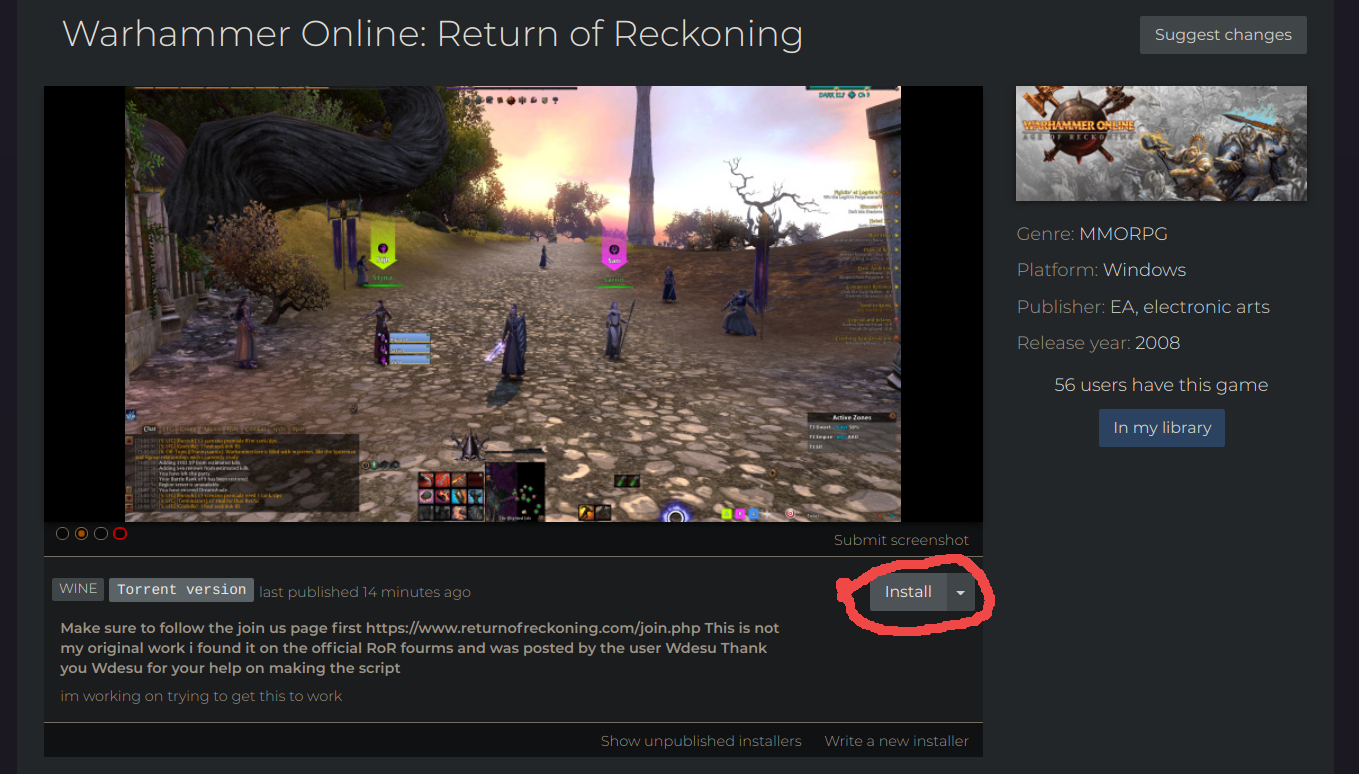 4. Select a directory where you want to install your game (Make sure its not the same where your downloaded torrent is)
Spoiler: 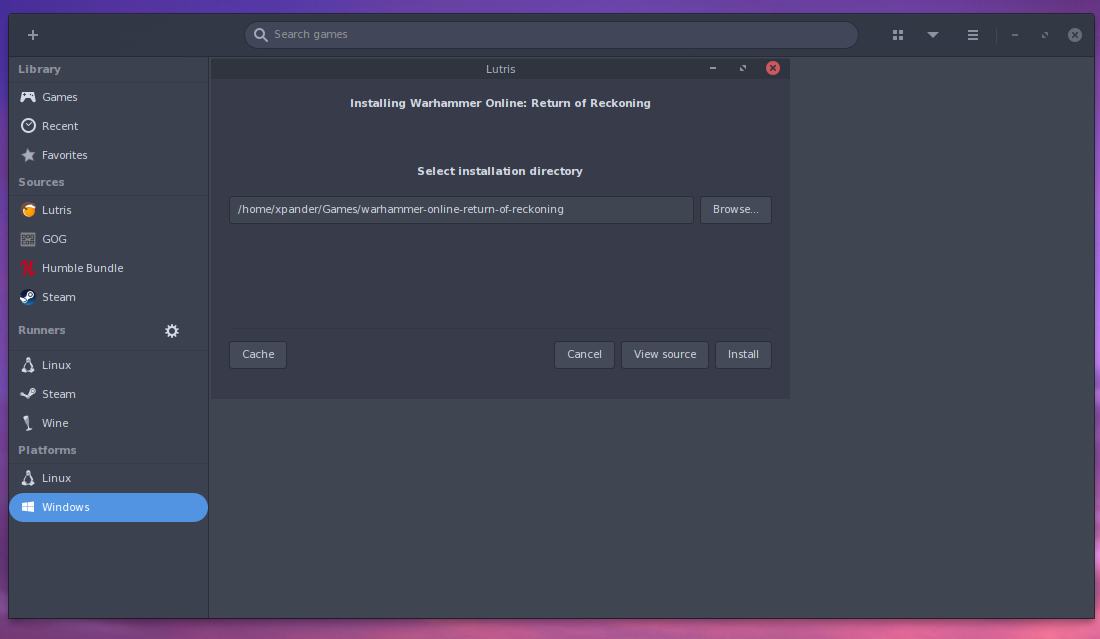 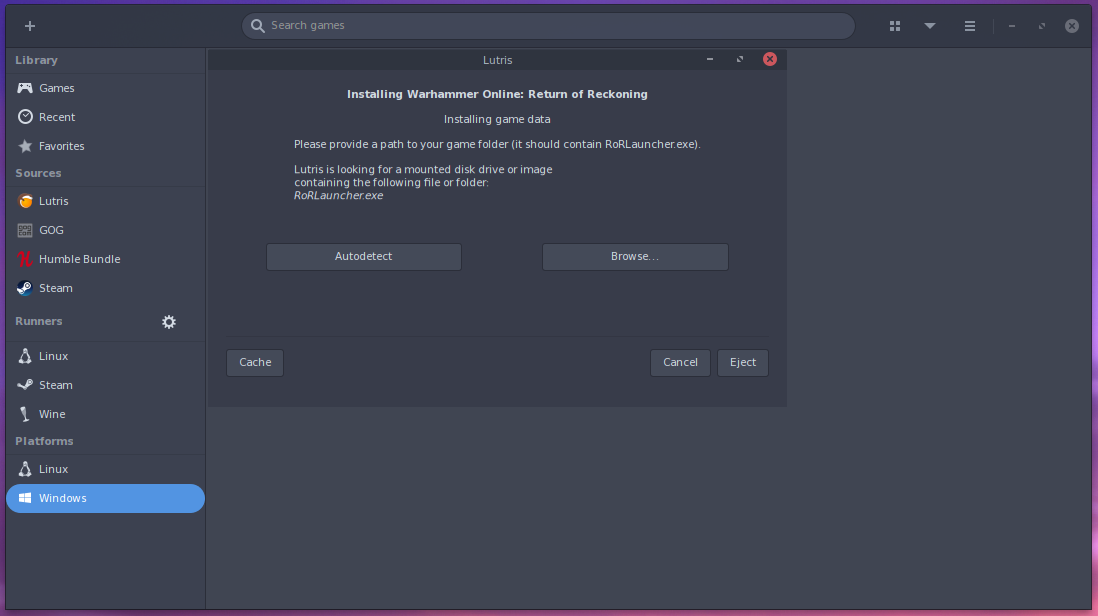 6. Wait for the Game files to be copied to your prefix
Spoiler: 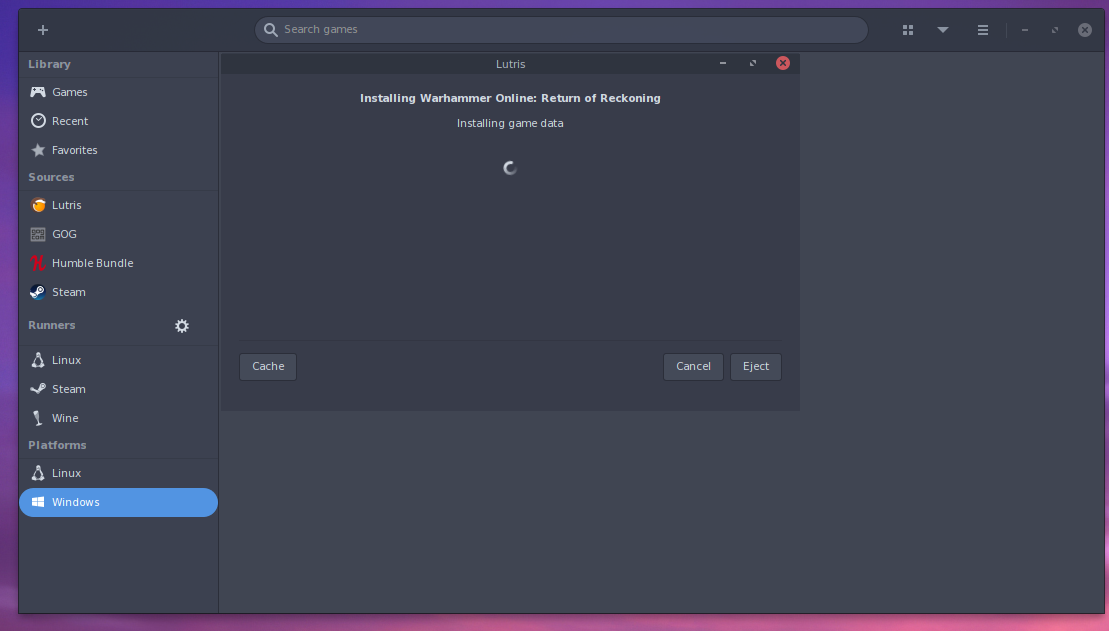 7. Wait for wineprefix to be configured.
Spoiler: 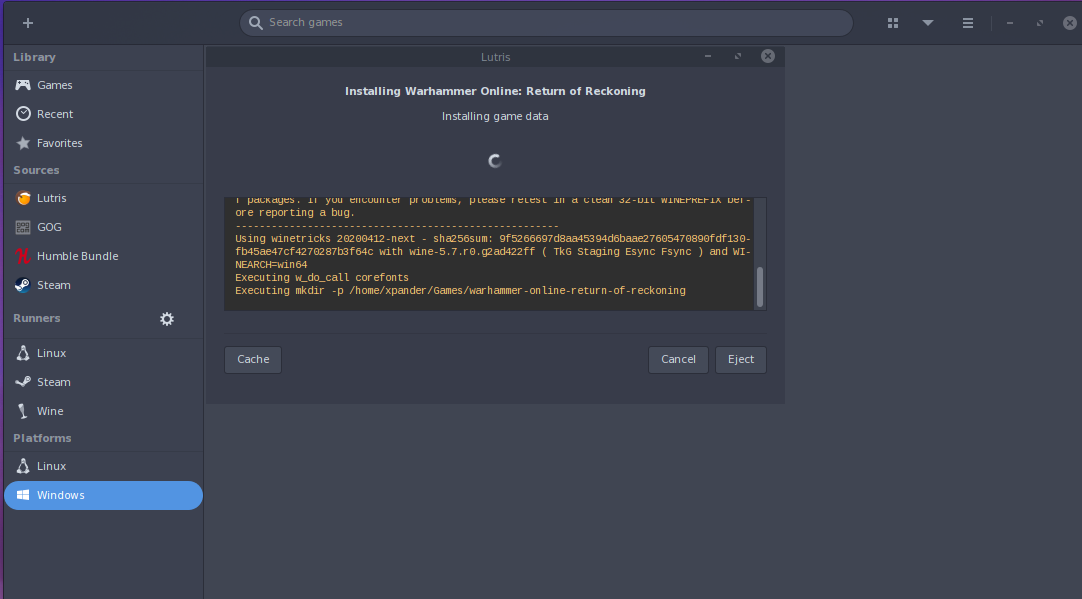 8. You are done. Congratulations!

Enhanched Graphics with vkBasalt: This works only with DXVK
1. Download/Install vkBasalt for your distro: https://github.com/DadSchoorse/vkBasalt
2. Download configuration files and extract them into your Warhammer directory: https://drive.google.com/open?id=1_7yxO ... EToTrQfWTw
3. Change the shader paths to full paths of your shader folder location in the vkbasalt.conf (make sure there are no spaces in your paths. you can copy the shader files elswhere also to link them up)
4. add ENABLE_VKBASALT=1 into the environment variables under Lutris or in your Scripts


Troubleshooting:
-If Launcher doesn't launch and Lutris says Game exited. You need to force install dotnet40. You can do this (change to your prefix path you chose on installing)

-Server indicators Red on the launcher? make sure you have lib32-gnutls and gnutls installed for your distro of choice - thanks pixeljuice2019

-Animations Wonky (people, NPCs moving sideways, backwards etc)? use the 32bit executable from the Launcher cog wheel. It caps the framerate to 100 and animations work fine. Can also use libstrangle to cap it

-Game doesn't launch after hitting connect on launcher (this can happen on older intel IGPs or if your vulkan drivers aren't working correctly)? disable dxvk by opening winecfg and set d3d9 as builtin in the libraries, under overrides

Addon Manager: https://github.com/Idrinth/WARAddonClient
-Copy the WARAddonClient.jar into the Warhammer Installation folder
-Make a script into the same folder containing

I'm not a Linux fan! But I decided to try, in the hope of at least slightly reducing the lags of the friezes and the crash of the game client.
Specially for the game, I installed Debian, and the game got up on it without any problems.

To say that I was pleasantly surprised - is to say nothing. Now the game works just fine, I forgot about the lags, even on the fort, even in the warband. Now no crashes, no lags, no friezes!

Under Linux, I can turn on all effects, during the battle on fort, edit the interface while in the warband, and write rel - and I won’t get any crash.

In two weeks I received only one crash - and that when rebooted the server.

With absolute certainty, I can recommend Linux to anyone who has unstable game play. And yes, the problem is not in the server, but in the disagreement of modern Windows and the game client.

What is my evidence? I have them!
Stream on integrated graphics Intel HD Graphics 4600
https://www.youtube.com/watch?v=sXIFo1HtGuc
Top

I can confirm this works great.
Top

I was able to get this going as well. I did have to run the setup under wine before lutris would launch it.
Top

If anyone wants notifications for queue pops, you can do something like this alongside the scenarioAlert addon

obviously substitute the sound file and message as necessary.

The package containing inotifywait was called "inotify-tools" for me.
ruscur - RR6x Shaman <Art of Execution>
From Australia or nearby countries less cool? Join our Asia Pacific discord community!
Top

If anyone wants notifications for queue pops, you can do something like this alongside the scenarioAlert addon

obviously substitute the sound file and message as necessary.

i also have this: https://github.com/xpander69/scalert_linux

but yeah scripting is easy on linux
Helpful links:

It doesn't run in my case.
I'm using Arch linux.
Lutris and manual way failed to launch the game. My wine package version: wine-staging 5.4-1
Using up to date March 2020 torrent to download the game.

I've tried followings:
fresh prefix 64 bit
installing everything listed in lutris script
tried other prefix with only vcrun2012 and dotnet40 (after fail - adding corefonts to that basic - didn't help)
repeating the same with 32 bit prefixes
changing windows version to XP (changes error message), win10 (the message remains the same as in win7) try changing wine version to 5.0 in lutris. do not use the system wine. use the lutris provided ones


edit: do you have intel IGP? cause i see message

looks like you GPU or drivers do not support that format. AMD and Nvidia should support fine, no idea about intel

You also didnt specify where it fails?... does the launcher work? or launcher also doesnt show up
Helpful links:

As I said, I've tried with default lutris script settings. To be more specific - as in video, with lutris wine (current version is 5.4). Downloading 5.0.
I have intel GPU hd4600, mesa 19.3.
I forgot to add that I tried to run it with vulkan (dxvk), but no effect on error message popup. https://pastebin.com/81FhyF81 wine logs with DXVK
The launcher doesn't show up - error message appears as in screenshot.
I tried it now with the prefix from previous attempt with d3dcompiler_47 - the same behavior.

But what if the problem in

and in the message error "hostname cannot be parsed" ?

It must be something on your system then. I just tested it from scratch, installed with lutris again. with the 5.4 wine. just same as in my videos, click and click and it works.
Can you try some other distro just to test it? maybe you are missing something on your Arch insrtallation. I do use Arch Linux myself also though.
Helpful links:

Users browsing this forum: No registered users and 21 guests