Forum rules
Before posting on this forum, be sure to read the Terms of Use
Post Reply
42 posts

damn, i had good group mates and guild in 2010, and for about one month i catch most of the ppl by my renown lvl starting from 1 to 50

"The pain in an ass..." - premade with 3 healers and we didn't have a single direct dps in our group... (im KotBS, this BW is my best target for guard for about 6 months

the only ones i got promoted as Tank-Champ on siege

1 point sometimes mean too much Found some old picture, not really old but its from Live server. I see someone named "Systerstina" in the picture, think I have seen that name here on RoR server

One from just outside Garrison of Skulls

-"Man I will stop play online games... Has been a pleasure to play with u... One of the best player in my opinion ... Thx for everything ..."
Top

A Few From Praag, Choas Wastes Etc. I try to get some more for all of you later this evening.
After I Finish My COFFEE Of COURSE!!! Lol Might see some familiar faces in these.
Did You ALL HEAR ME???!!!!

Loved the screens submitted so far from others very entertaining and hope to see more.
https://www.flickr.com/photos/[email protected] ... otostream/

Don't RAGE After You Die in War, Make A Screenshot/Wallpaper Instead. War is a Beautiful Game.

Coffeemakes wrote:A Few From Praag, Choas Wastes Etc. I try to get some more for all of you later this evening.
After I Finish My COFFEE Of COURSE!!! Lol Might see some familiar faces in these.
Did You ALL HEAR ME???!!!!

Loved the screens submitted so far from others very entertaining and hope to see more.
https://www.flickr.com/photos/[email protected] ... otostream/

Yes More Screens For All Of You to enjoy that i made + were sitting on my xternal hdisk for awhile. Yes!! MOre is Better Right??!! More COFFEE!! + More SCREENS!!!! I will have more for You Also in few days
So please keep checking back as i will continuously Update this, Rather than make another seperate Post.
Screens are from late 2008 to the last days the Live Servers went down few years ago, so you veterans may see yourselves in a few of these.

Blessings from the Raven GOD + Have a Safe and Happy Halloween!! Did YOu HEar ME??!!!

Don't RAGE After You Die in War, Make A Screenshot/Wallpaper Instead. War is a Beautiful Game.

Meeting a german 2fg + guild with our 6

Dark days when 2 BGs are on ya

I love this kind of threads, because each of us made Warhammer the amazing experience most of us dearly recall.

I am going to post of my own stuff. It's basically the EU Warhammer's story. I have been in true love with Warhammer since beta. I was there at day zero and when the last server shut down. I have had an amazing experience with some of the best and / or friendliest guilds on my servers. 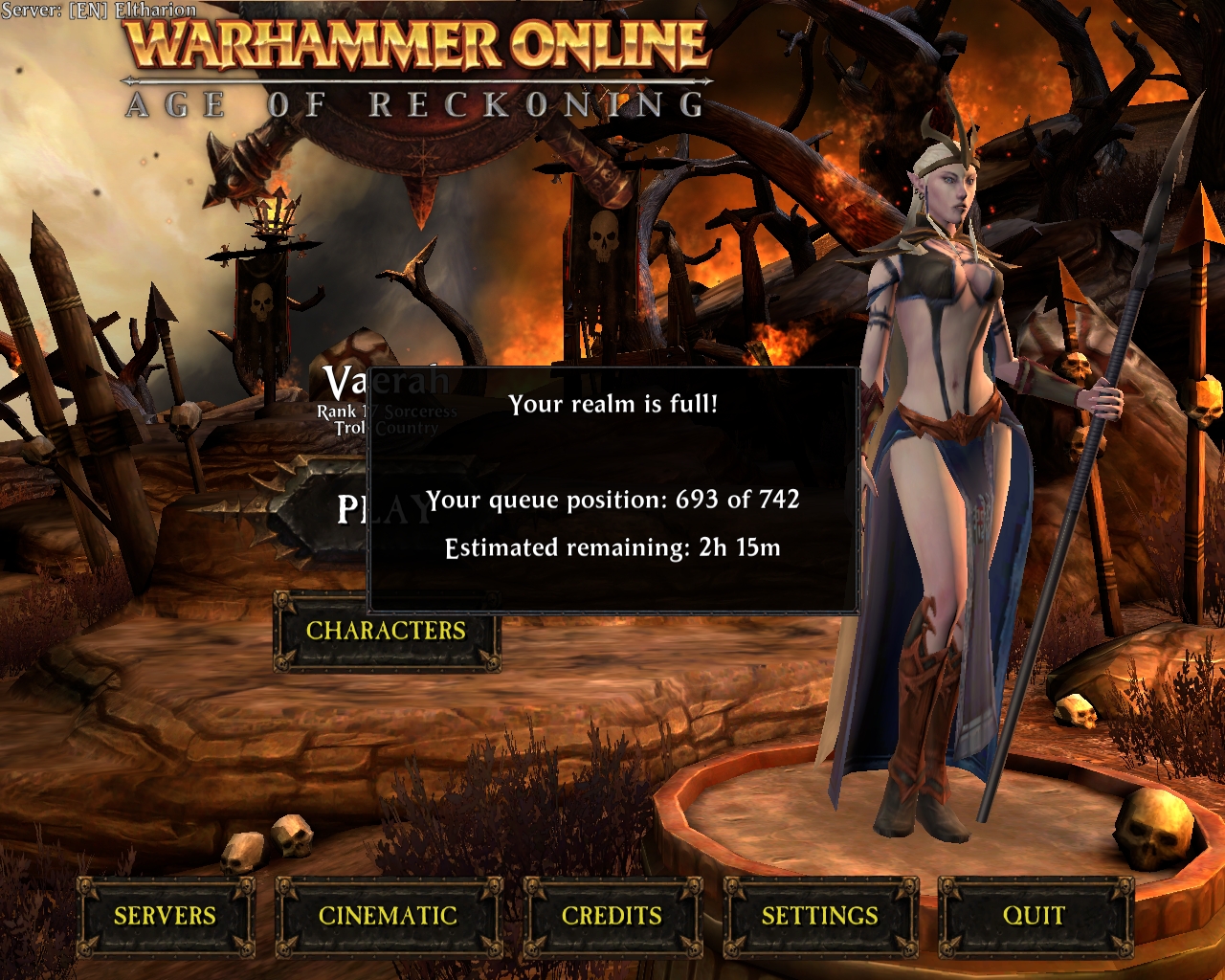 In the next days it got better: 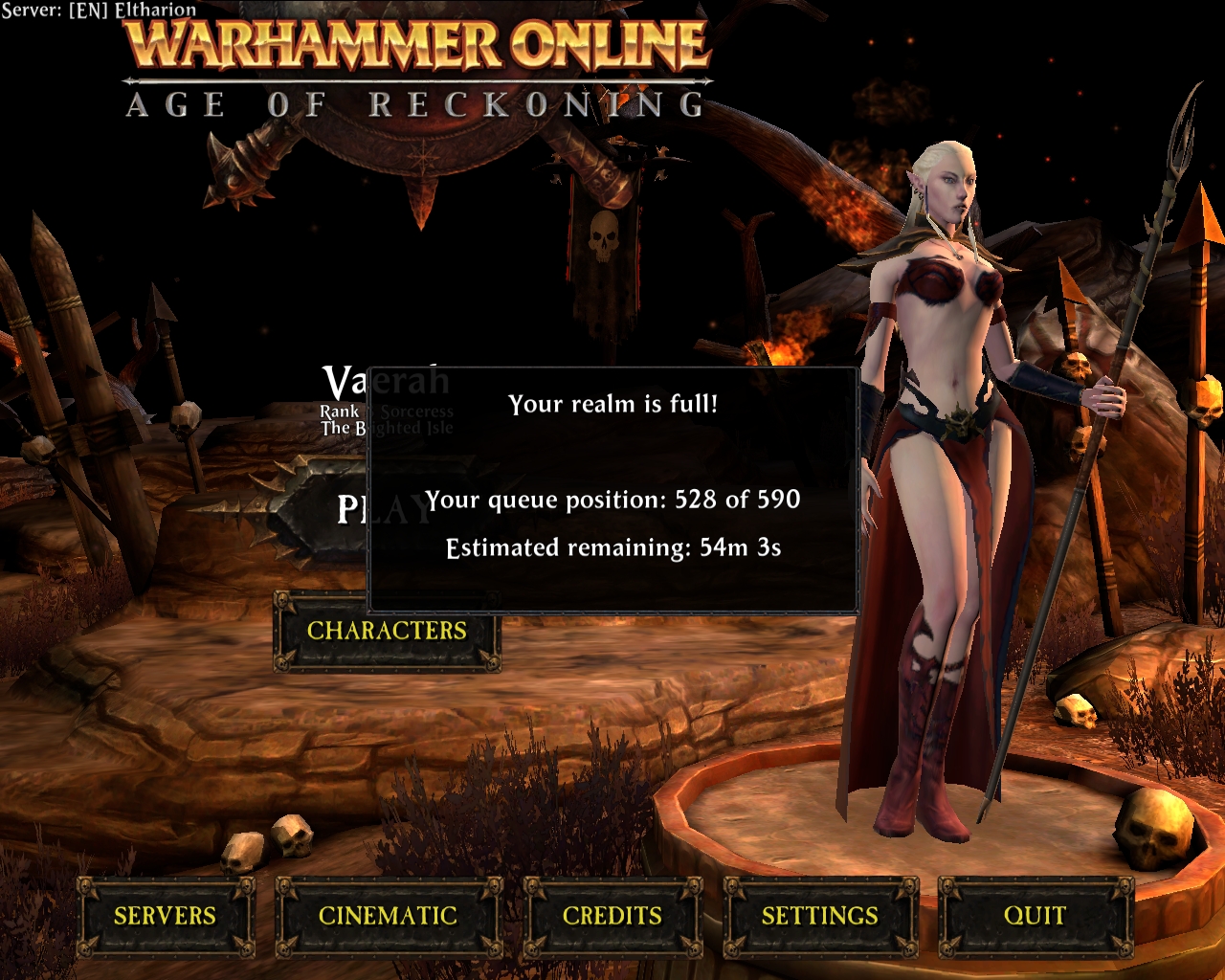 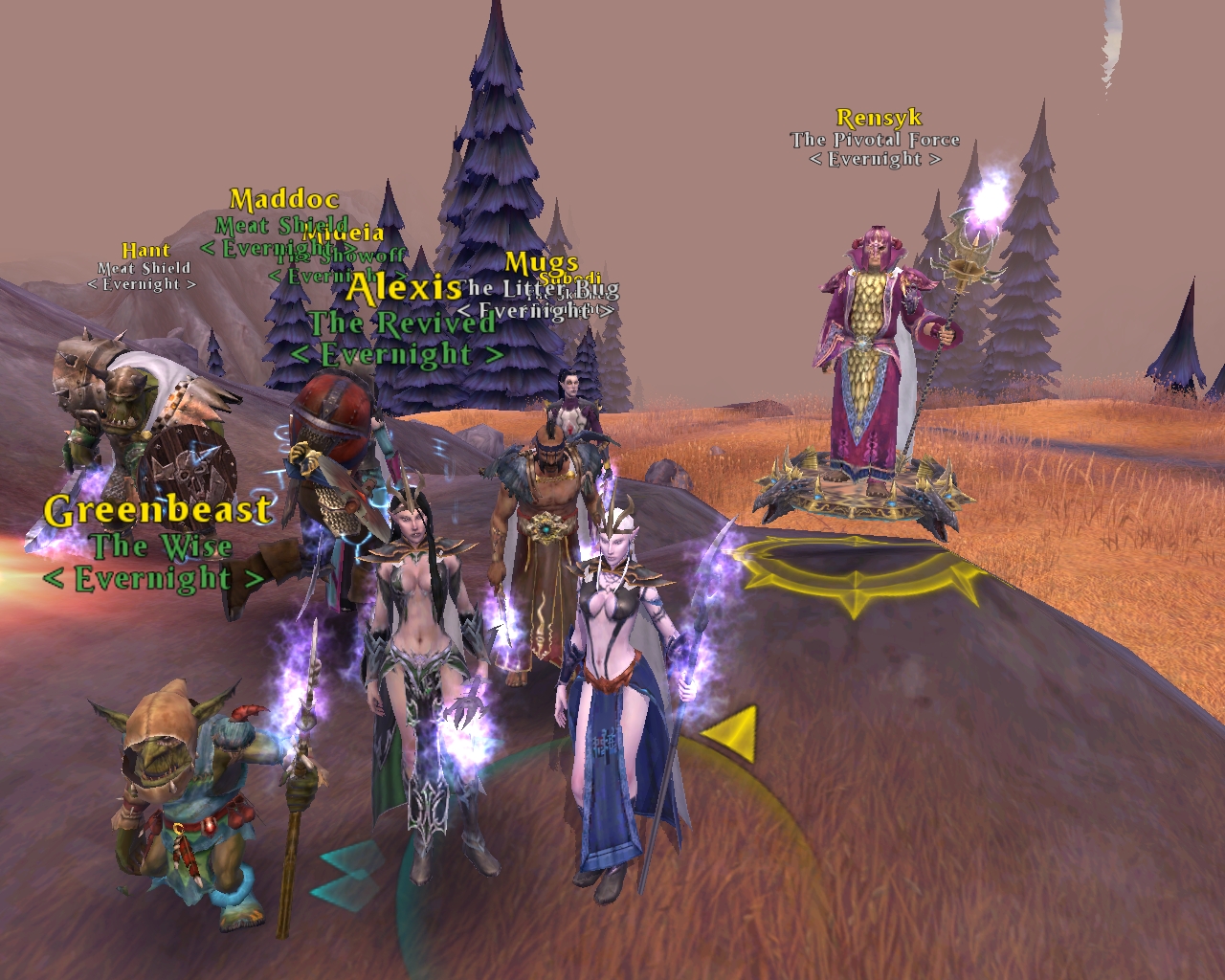 My server was simply epic: it was Eltharion, where legendary, ancient guilds like "Server Police" and "Nagarythe Corps", "Deathrow" and "Greenpeace" were predominant. 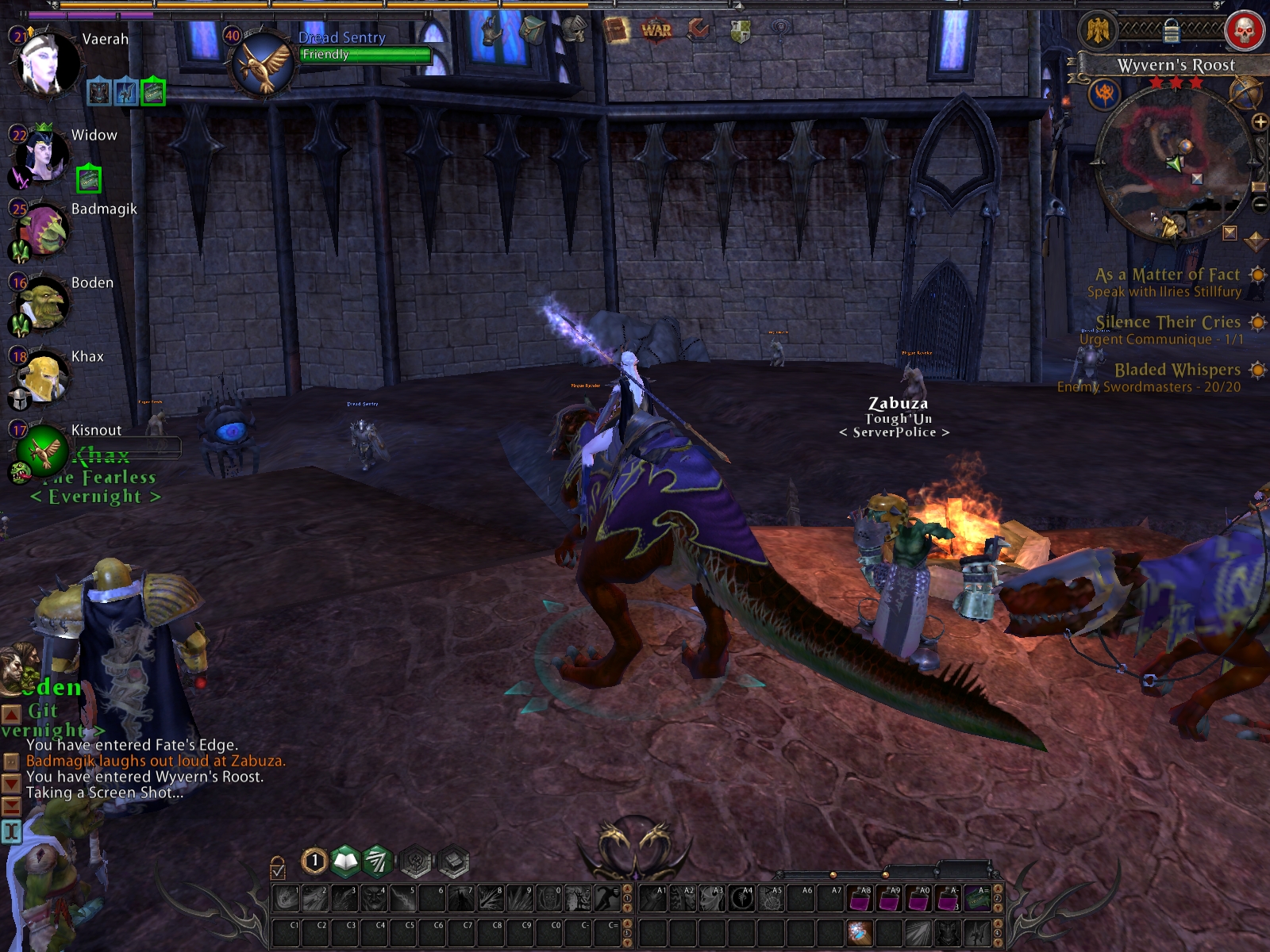 Some of the players in my screenshots are probably still remembered by somebody, they were awesome guys in all regards and it has been an honor playing with them.

Here is the first "server event", they gave out masks: 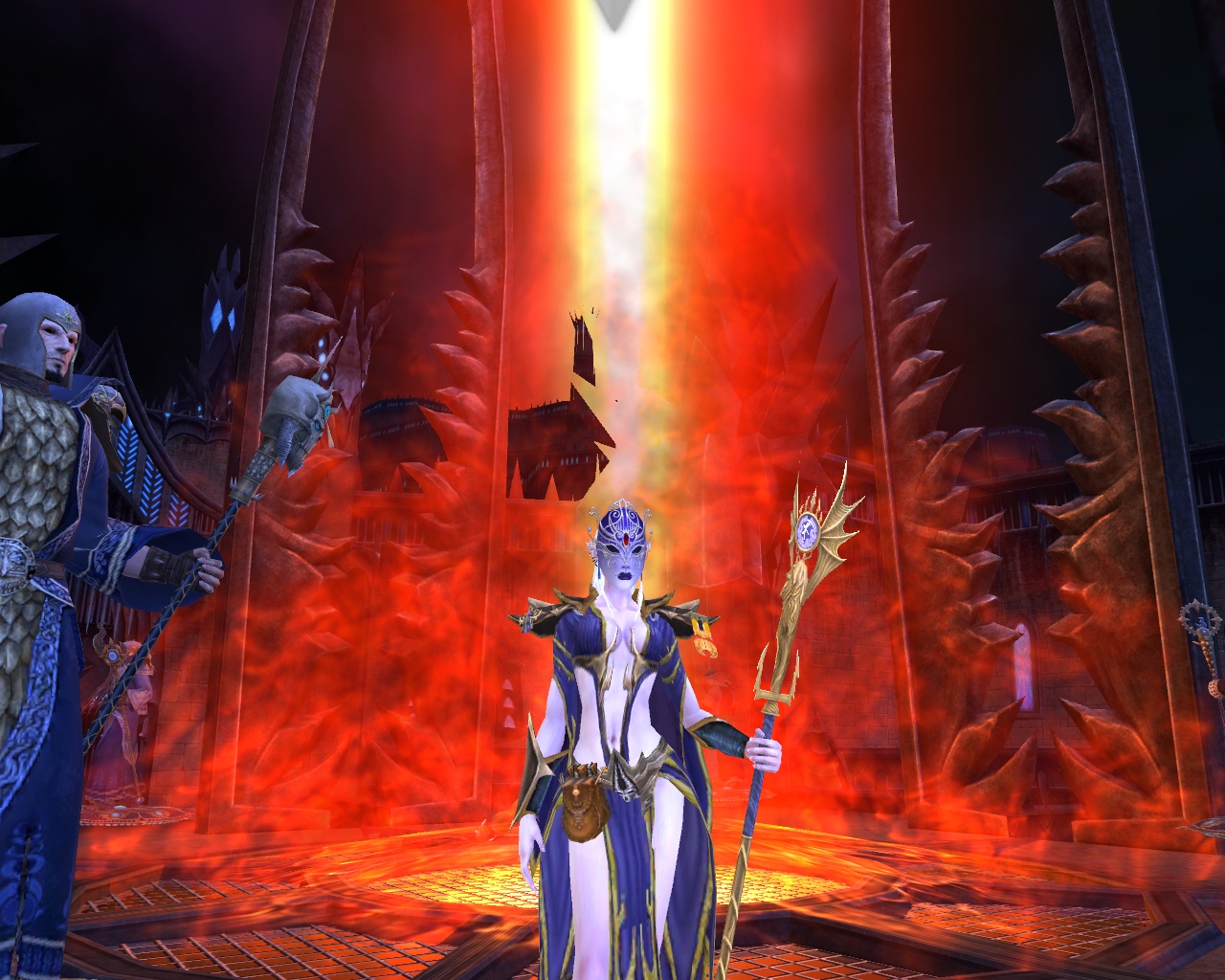 At a certain point I joined Nagarythe Corps, an awesome guild of old. We are talking about the early times, before the end game changes due to massive lag etc. Gameplay was epic. It was a continuous warband vs warband fight and some of the prominent guilds fielded more than one warband! 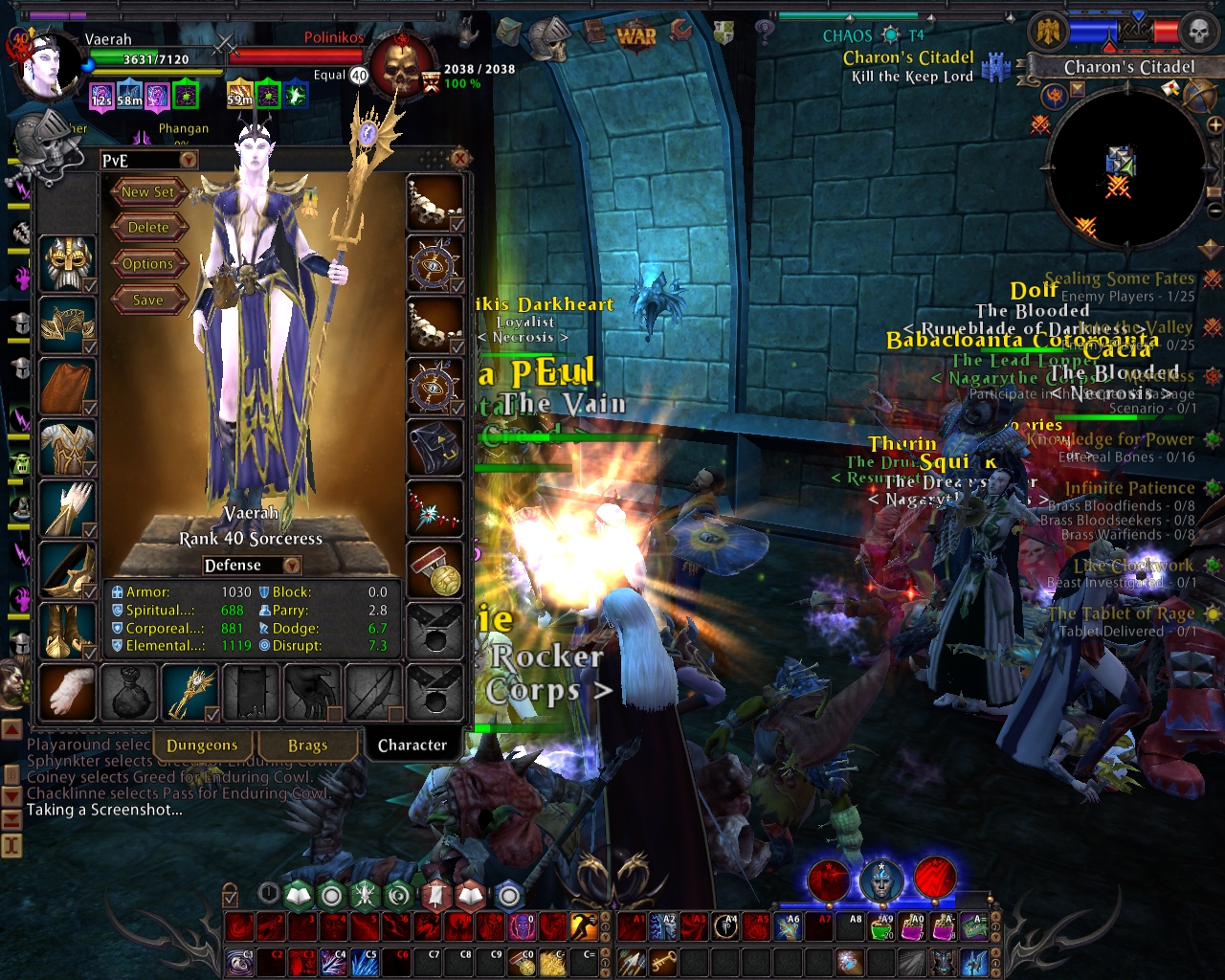 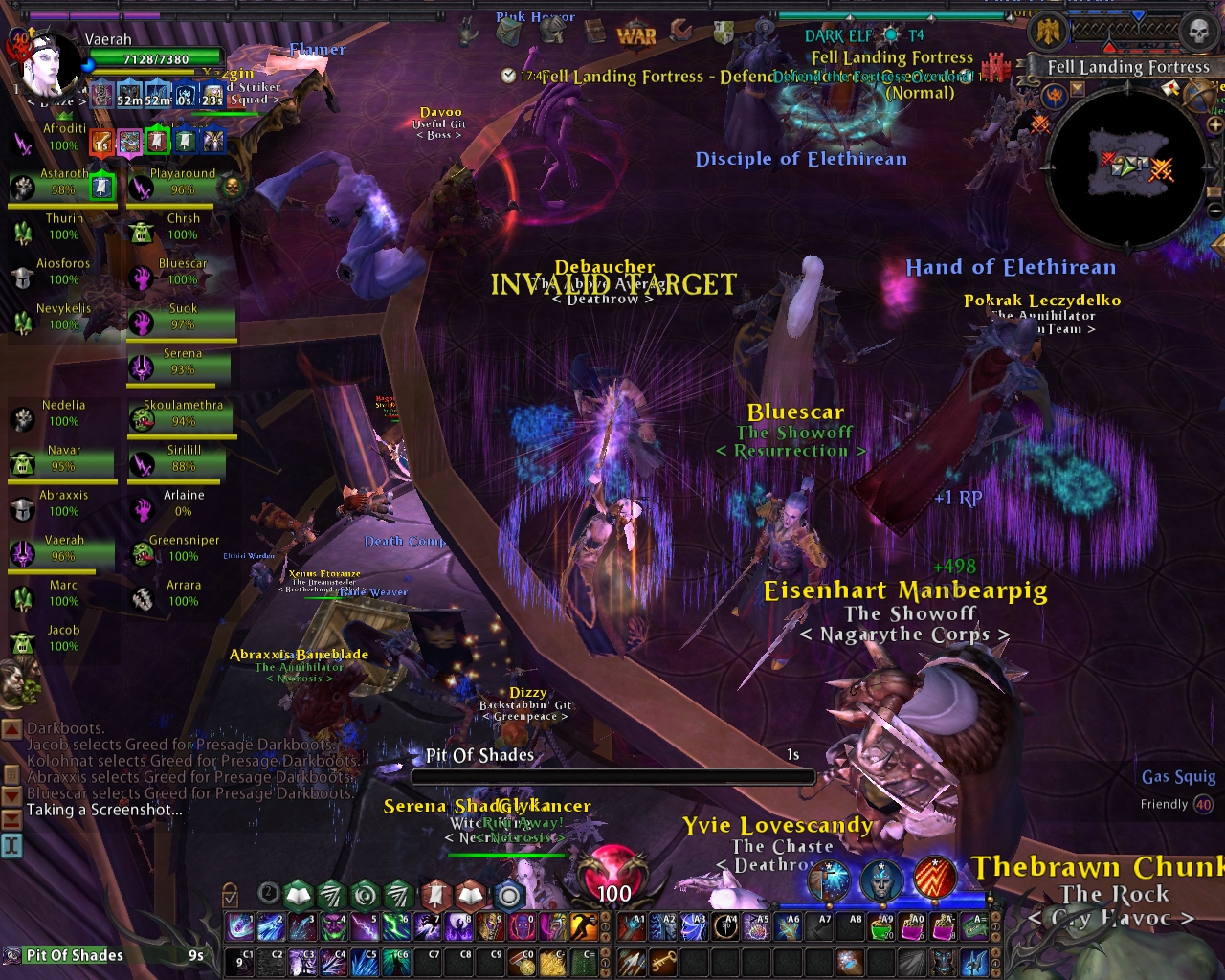 But Warhammer was fatally flawed at its very core: the RvR end game. Mythic attempted salvaging the game. As a beta tester I kept sending them feedback (both in form of pictures and videos). They took some of it and ignored some of it. Here are a pair of the pictures, relating to fortresses issues including AoE induced problems:

We know how it ended up. A massive amount of players quit the game. All my guilds and friends quit as well. I quit for some time too.

Fast forward and Warhammer is down to fewer and fewer servers. I got moved to Karak Norn. I joined a very good guild called "Unnamed": 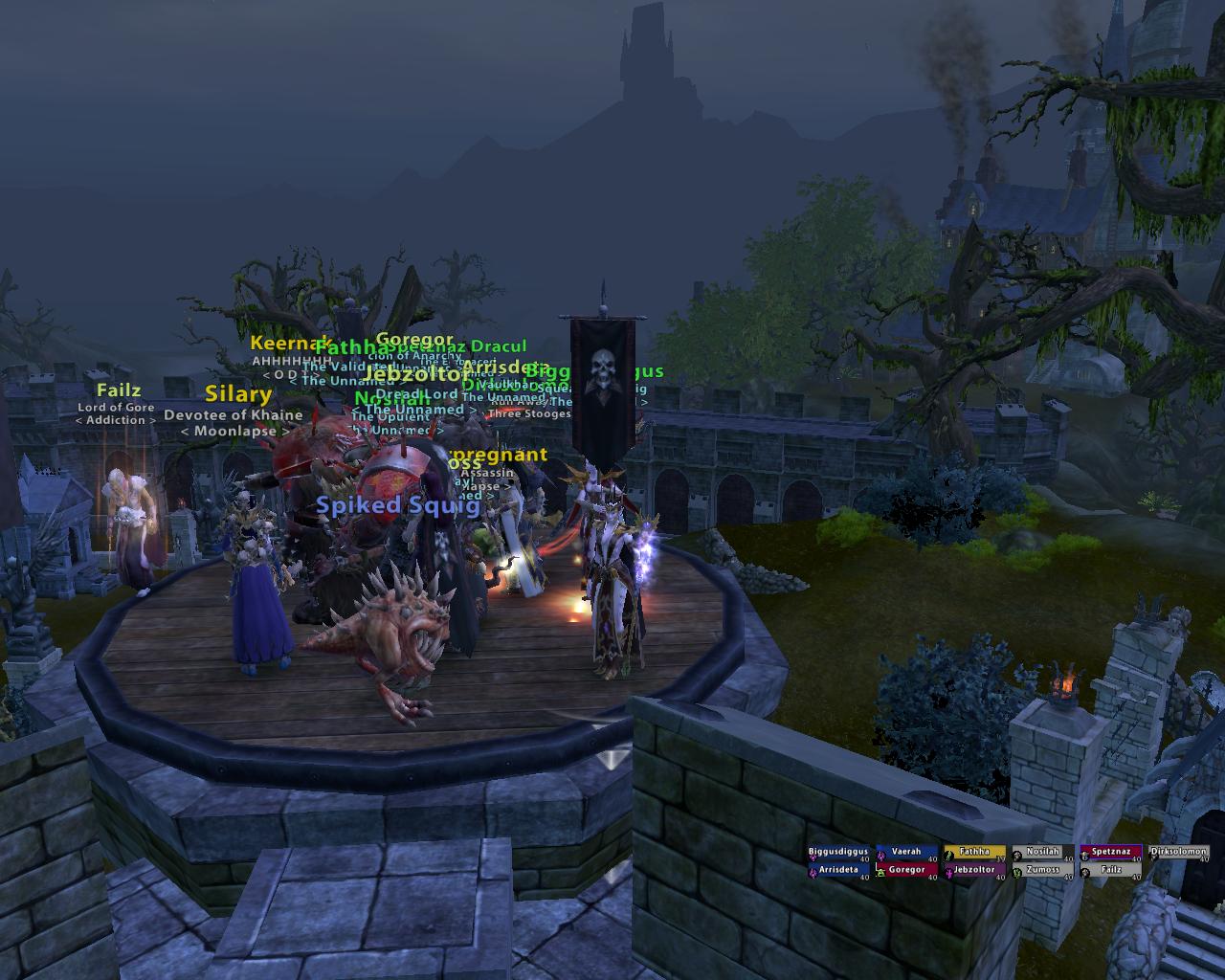 Sadly, nothing lasts forever. Warhammer was waning as well. The guild lost people and split. Part of the surviving Unnamed members joined an alliance, "social" guild called Moonlapse. Whereas they were not exactly focusing on high skill gameplay, they stubbornly held to the original Warhammer "warband size epic battles" mission. We were one of the last guilds on the server to field a full warband, when most called "zerg" going around with a 6-12 men team. 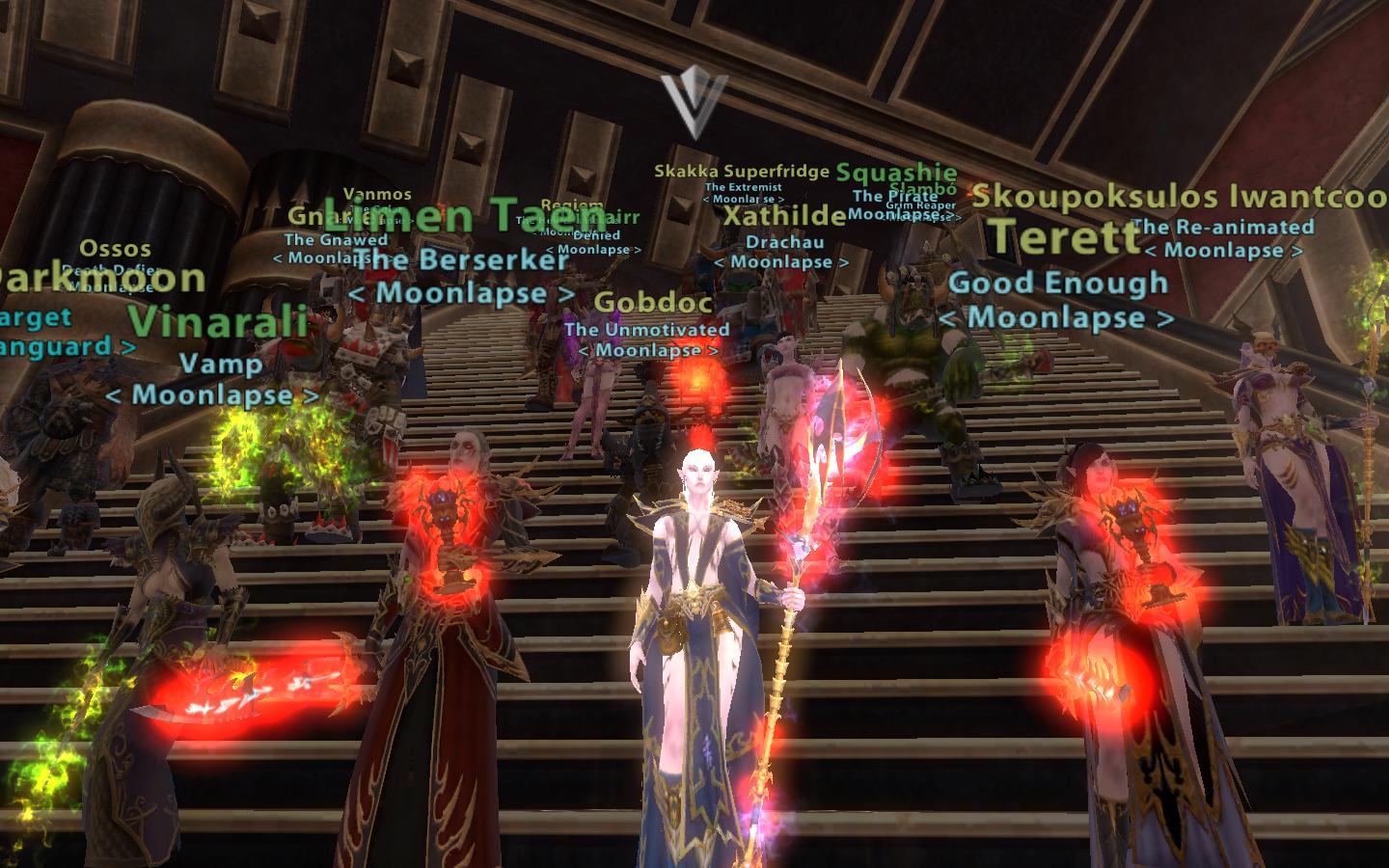 When I felt like turning up difficulty and fun up a notch, I joined one of Luranni's awesome groups. Just one evening with those guys made worthwhile the effort getting to RR100 and playing at that RR level for so much time without getting bored.

I really enjoyed playing my sorceress. I tuned here to the best I could.

With some quite nice kaboom results! 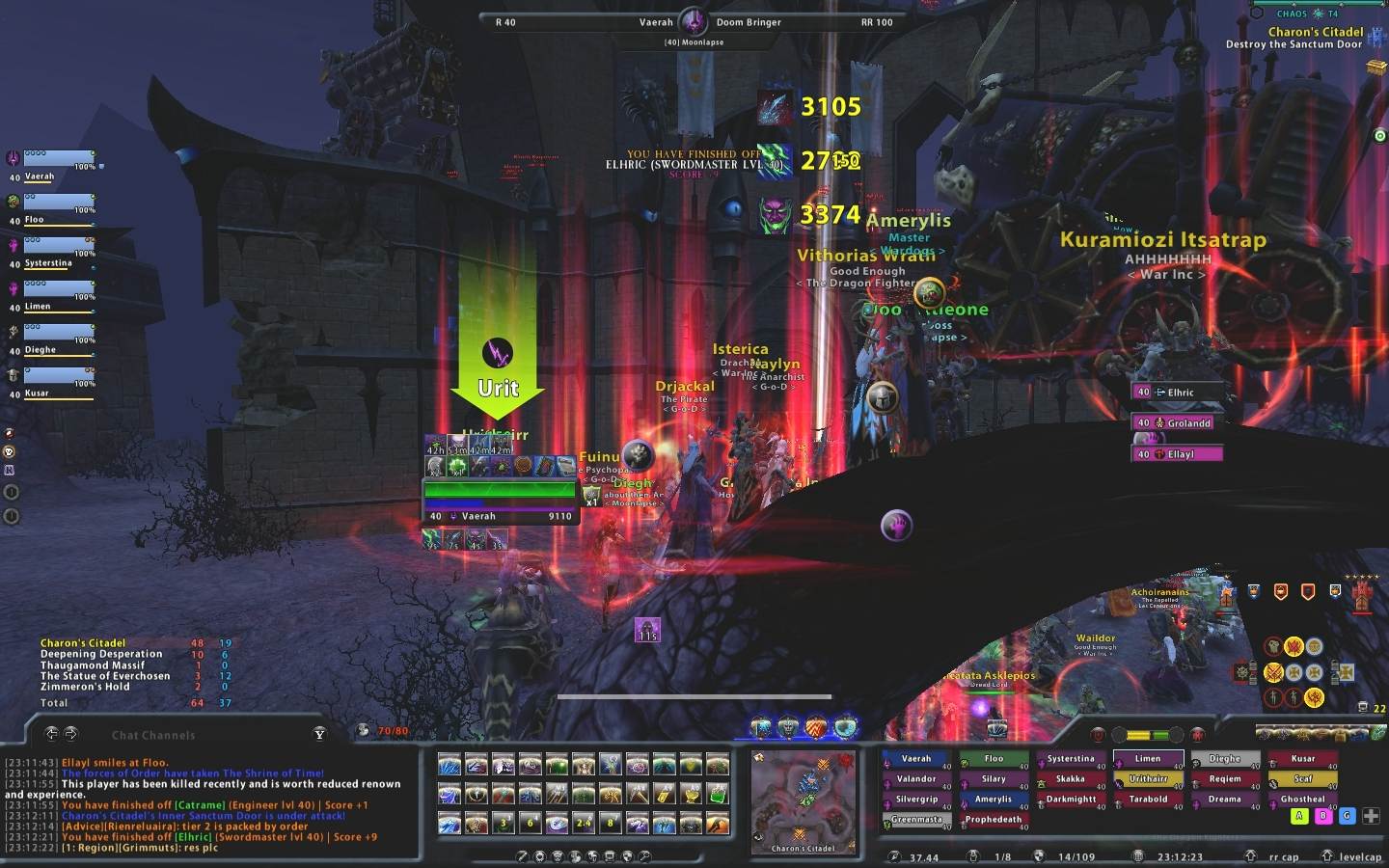 And killer fancy parties like this 3 sorcs + gobbo "vs anything" group: 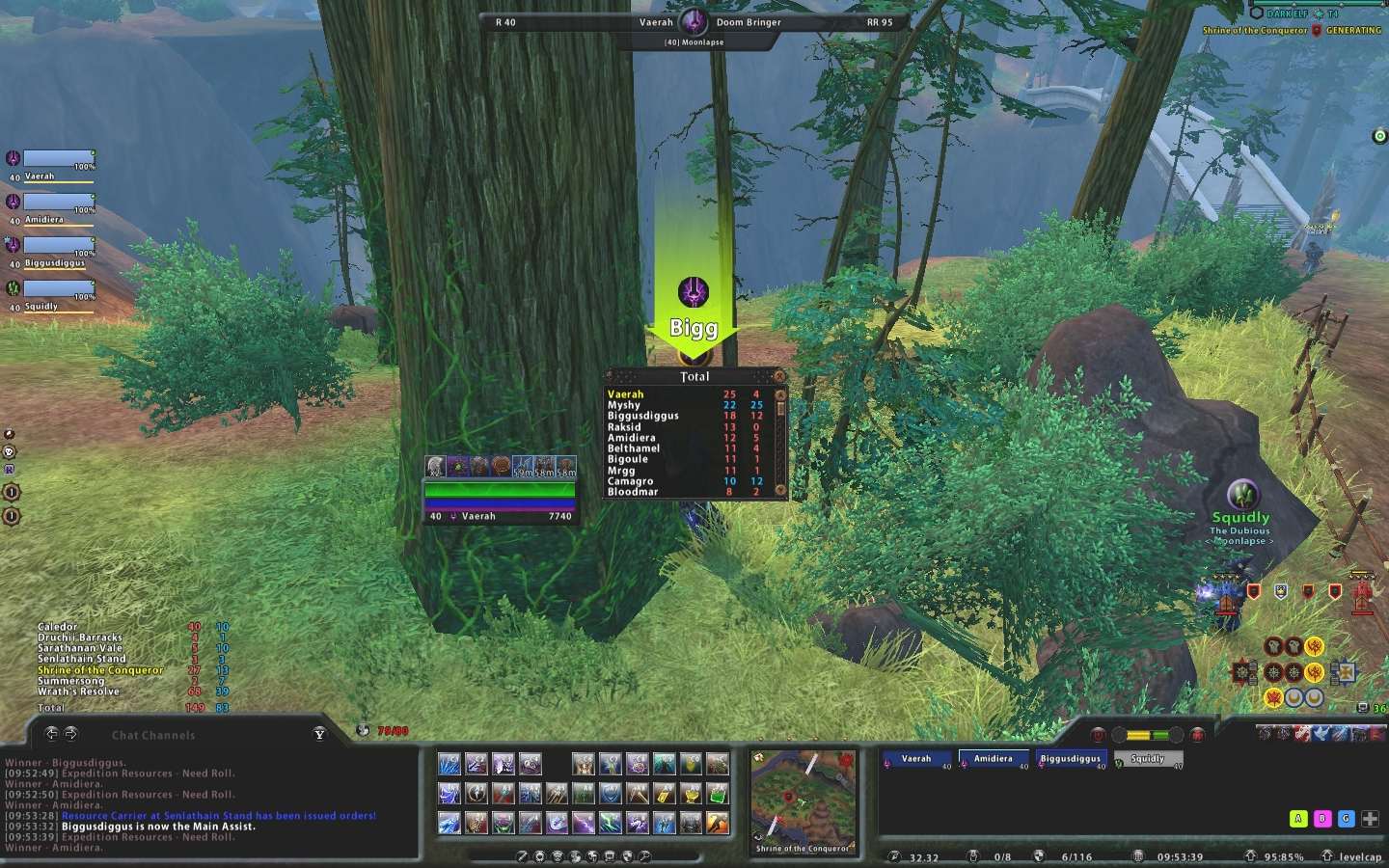 Sadly Warhammer came to an end. The last day is unforgettable. We all fought and finally just "met" in Praag for a final, touching goodbye: 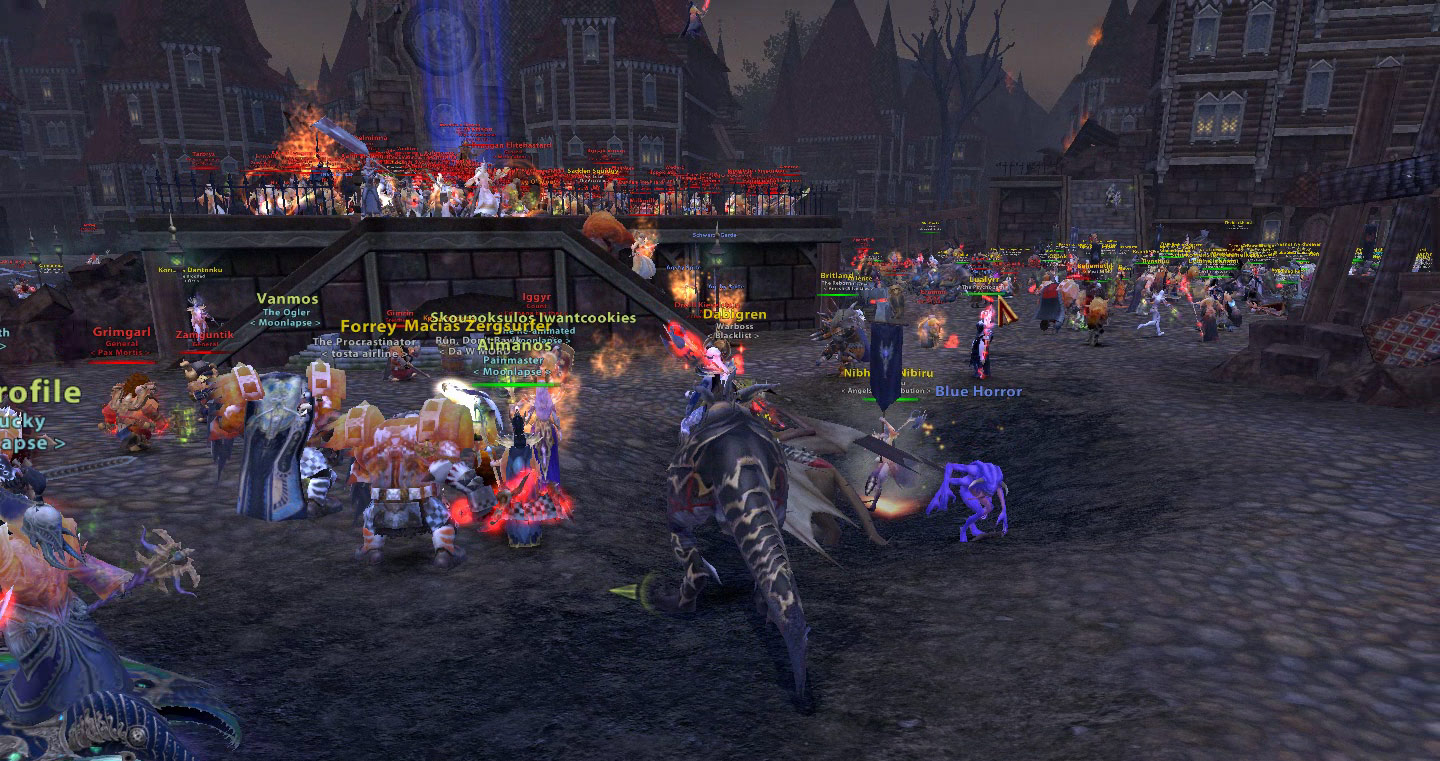 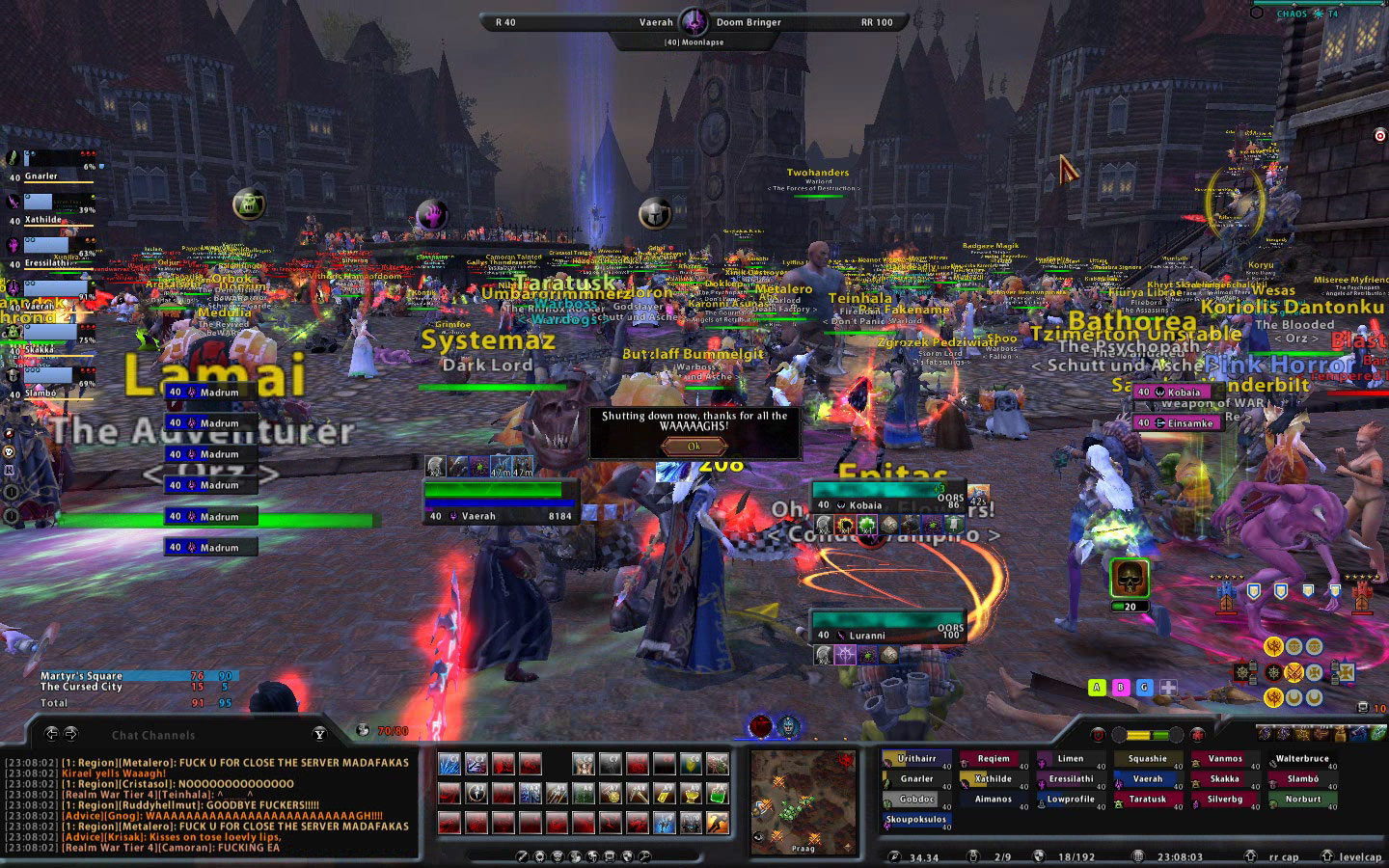 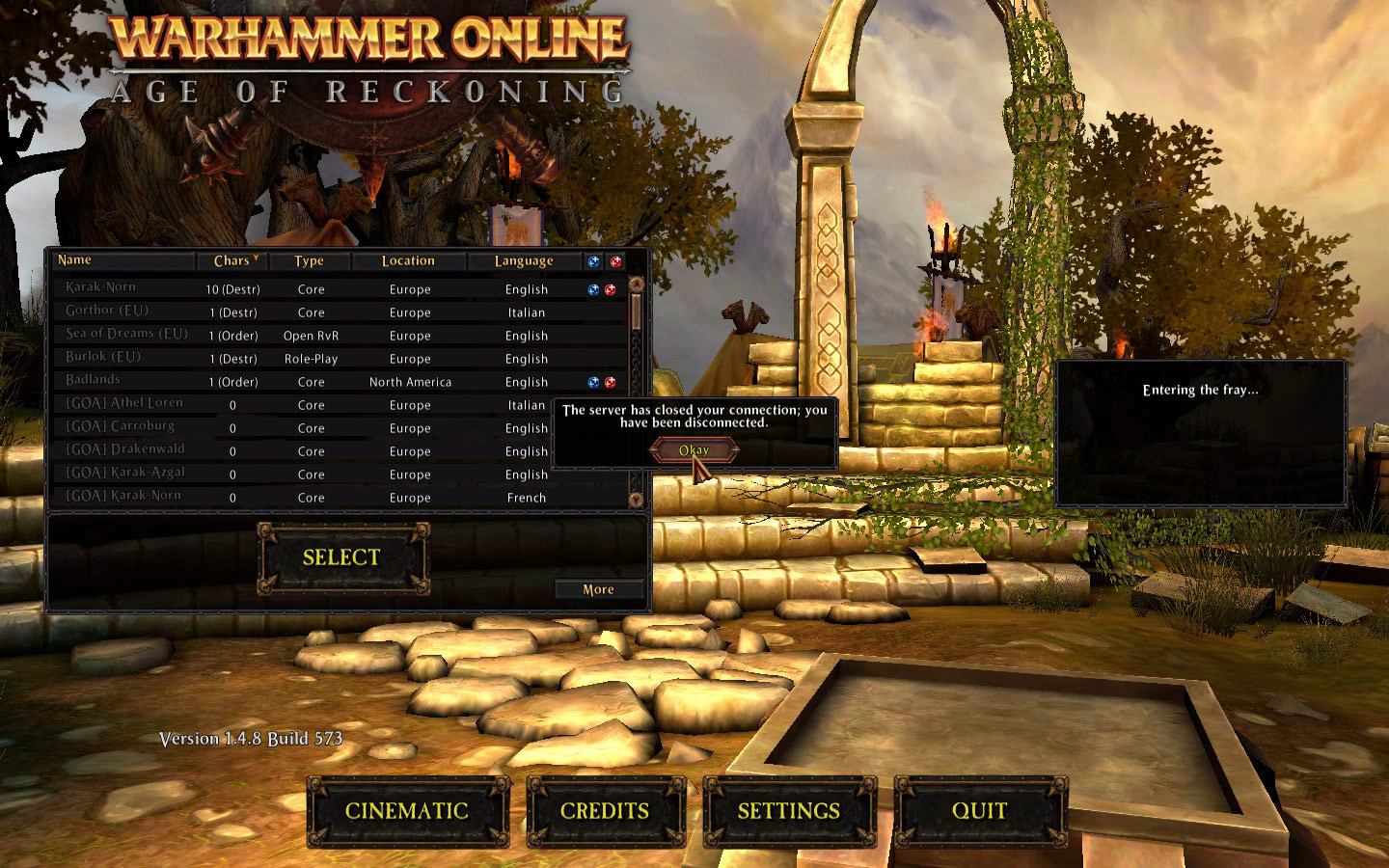