Get organized here and slay that monster, or challenge your enemy to an epic battle on the battlefield.

Forum rules
Before posting on this forum, be sure to read the Terms of Use
Post Reply
74 posts 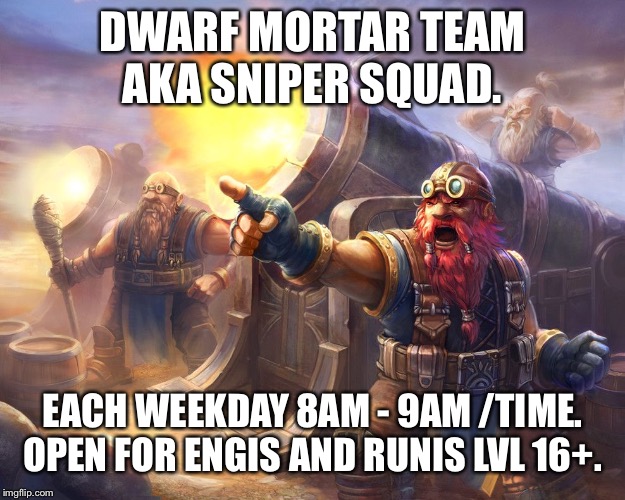 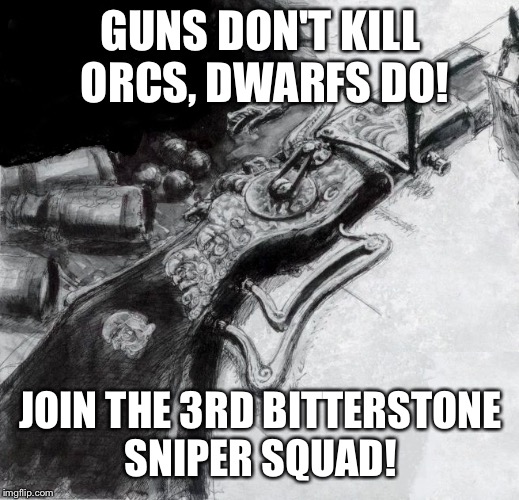 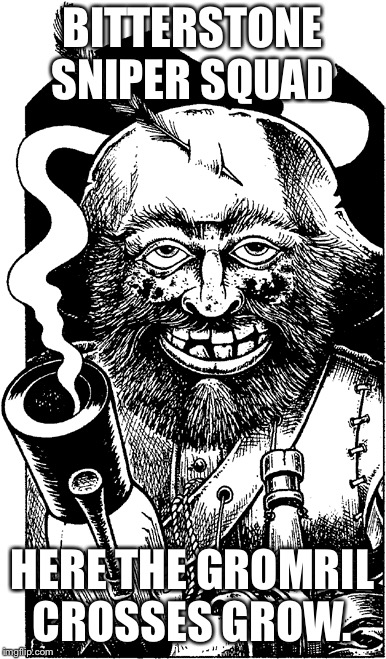 NO roleplay, NO standing in a line. Straight Action!

REQUIREMENTS: Starting today we will run again a Dwarf Sniper Group each Saturday and Sunday from 8am - 9:30am Altdorftime aka /time aka Servertime. That are early hours for EU and something like Middnight for Westcoast USA.

The Group is open for all Dwarfs lvl 16+ Engineers and Runepriests regardless of guild membership.
Spec for Engi is recommended Sniper/Phosphourus shells but not enforced. But you can go full DPS without holding back.
Runepriests can be heal or DPS setup.

Group composition and such is coordinated in the Bitterstone Discord.
https://discord.gg/srRS6b2
Also we will run dwarven music while we are at it.

Primary Mission Objective:
Roam RvR and lay ambushes. The group is not really SC fit but we do them anyways and you can do some fun stuff in small scale RvR. Goal is not to push zone lock but to harass and get some BOs. Do that for an hour and then everyone can go on with their own stuff. This is a Snipe and chill group. So don't expect super stressfull RvR Action. We are there to get some nice killshots for our sniperlog.

The Bitterstone Guide on the Kegsniper has been updated, also with instruction videos. You might check it out.
Kegsniper Mk III 'Thorbolt Pattern'

Commands at the Full Sniper Squad
If you run in a Bitterstone Sniper Squad these are the used orders in the field. All commands are given by voice com. For a successful target dealing it is important to stay near the main assist/squadleader as there are obstacles and spikes everywhere in the area. Also to listen and use mentioned Abilities.

“Target!”
– Squad leader has assigned a Target. Use the Enemy Addon macro to get the Target, or use your Assist macro you have built to get the Target. DON’T shoot at the Target yet. You will only make him realize he is targeted and he will move away.

“2…1…Snipe!”
– Activate your Snipe ability at “Snipe” and then continue with Armor Piercing Rounds and Focused Fire to finish the Target. If Target is out of Range just use AP Rounds. Because Snipe has a 3 second cast time you can directly activate AP Rounds after the cast. That means that directly after shooting the bullet out of your rifle, you can activate AP Round and when the bullet hits the Target it will be armor piercing. Also the two ticks from Hollow Points will be Armor Piercing too.

“Gunblast…Gunblast!”
- Use your Gunblast Ability. Two times. Idea is to put Damage fast on the Target.

“Target – Just Fire!”
-Get the assigned Target and just use your own rotation. This is usually given if the situation is uncontrollable and Destro is everywhere.

“Independent Fire!”
-The Squad leader has problems to choose the right target as it is lagging like hell or every destro squishy is hidden behind a black orc that is big like a truck. Choose one Target of your own and begin to shoot at it. Try to not use Snipe as the squad leader will soon choose a designated target and want to vaporize it.

“Flame Turrets, Kegs, Landmines on our Position!”
-Situation will get ugly soon. Destro is to close and it is time for some AoE Shotgun action and/or a last stand.

“Bitchelf!”
-Witchelf has decloaked in the Sniper Squad. Get the Target and use Knockback Grenade immediately and fire everything you have on the WE.

Bitterstone Thinderes, the guys who prove that fun is the most inportant thing in a game.
Alea iacta est
Top

Sniper Squad started today and was fun.
Todays Setup was 2 IBs, 1 Engi, 3 Runis.
We will continue and some of the IBs are leveling their Engi now.

We are reviving the Sniper Squad.
Playtime will be not each weekday as I have some things to do on several days. Best to ask in the Bitterstone Discord when we roam. But prefered hours are the above mentioned.

The Bitterstone Guide on the Kegsniper has been updated. You might check it out.
Kegsniper Mk III

Also we are looking for some Singe Target DPS Runis out there to support us.

Join the Action lads!
The sniper Squad is open to all Dwarfs of all Guilds or Guildless.

I'm usually online running a sniper squad every day of the week from:

Still in need of more Engis and Runis with the Enemy Addon.
If ye are an IB or SL you can also join, but expect to sit a lot in ambush position and wait for some unfortunate destros to come by.
As we are most of the time in a 0-6-0 Setup, expect to die a lot.

Usually it is like a WH group, except that you can't Stealth.

So if we die it is our fault and we cant push it on the Healers or Order Tanks not doing their job. It is only us vs them. No one to blame except ourselves.

Btw. If you hear me scream: "Bitchslap!" I'm refering to the Concussion Grenade.

If you run a while in a glascannon squad you will use it often and on time.