Forum rules
Before posting on this forum, be sure to read the Terms of Use
Post Reply
136 posts

Orgruk wrote: ↑
Tue Oct 13, 2020 4:44 am
Don't know if it's quite relevant, GTDC first purpose wasn't to deal that much of damage but to pull someone fleeing combat (in small scale fights). In larger scale it was "just" bringing flat damage. The small burst we can have right now, compared to live era, comes from Tantrum .... based on my own experience.

the burst generated by tantrum can be used by slayer too, choppa had more burst for another reason.
Before the last nerf (02/10/2020 patch) Choppa's burst potential was coming from the combo GTDC+interrupt+skill, which let you deal damage 3 times in 2gcd with the eventual add of hurtin' time or tantrum.
The combo ID+retribution let slayer deal high damage for 5s, also ID increases slayer's sustained damage in both AoE and ST.
In this i see the pattern Choppa-burst/slayer-sustained.
But this was before patch, now Choppa has been deprived of his burst
Nocturne
Zputakatarro-Choppa rr83
Zputadenti-Shaman rr77
Ysaran-Blackguard rr60

and then WP, AM, IB, Slayer and SH
Top
Ads 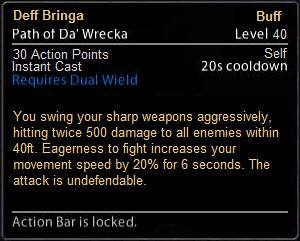 Maybe this one could be more "bursty"

I also thought another one, more similar to GTDC. basicly the idea is to give back the undefendable damage and the tick on interrupt and then replace the pull with a AoE snare for the duration of the channelling
Nocturne
Zputakatarro-Choppa rr83
Zputadenti-Shaman rr77
Ysaran-Blackguard rr60

and then WP, AM, IB, Slayer and SH
Top

Users browsing this forum: No registered users and 20 guests