Forum rules
Before posting on this forum, be sure to read the Terms of Use
Post Reply
37 posts

Issue:
Since April, the Zealot and Rune Priest heal rituals have been procing various tactics and are listed as a potential bugs to be fixed according to the Tracker (https://github.com/WarEmu/WarBugs/issues/16402). 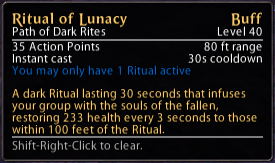 Suggestion:
Allow the heal ritual to continue to be treated as a direct heal and/or when a heal crit is scored, continue to proc both types of tactics accordingly.

Justification:
1) Zealot/RPs are underperforming in group healing, particularly in the forts and cities and especially in comparison to Dok/WP which are outperforming all other healers. Allowing this change to continue will create greater parity between the healers with no disparity in terms of interfaction balance.
2) These changes have already been server wide for 4 months now and the majority of healers are finding these changes not only balanced and useful, but highly synergistic with RP/Zeal's long list of otherwise arguably underpowered tactics.
3) No additional work is required. Continue to allow these procs to continue and monitor/adjust as necessary.


Opposing view point:
1) The heal rituals were considered to be ground pulse heals in a fashion similar to the AoE damage skills of Rain of Fire/Pit of Shades which also do not proc.
2) While the heal auras were allowed to crit and were considered to be direct heals on live, they were likely not conceptually designed to proc anything. In at least one patch note on live, healing auras were found to be procing direct heal tactics, but this behavior was later corrected by Mythic.
3) Increasing the viability of heal aura now makes all other auras obsolete outside of anything other than pve.
Last edited by Valarion on Mon Aug 24, 2020 6:17 pm, edited 5 times in total.


Best healers in the game are currently Dok/WP and with ~2500 more armor. Do you even play a high RR healer because I play 6 of them?

Update: Nevermind, I just saw your posts, you literally dont even play a healer. Thanks for contributing to the discussion.
Last edited by Valarion on Fri Aug 14, 2020 8:34 pm, edited 2 times in total.

Oh I meant best balanced healers. I thought Dok's and WP's were just considered gods not healers lol
These 2 classes are just made for the FOTM players right? Do we actually consider them in valid class arguments?

Update: I'm becoming famous! If only I played anything but the hardest class in the game...
Top

Ok I do play a dok and I'm curious. Plz explain how does dok gets ~2500 more armor than a zealot?
"Can we play with him, master? He seems so unhappy. Let us help him smile. Please? Or at least let us carve one on his face when he stops screaming."

I agree with op. Beside what he said want to add that this change opens new builds and add some diversity for builds beside quite one dimensional heal build, so it is good change.

Would not say it is so strong neither cos u could easy proc all of that with gheal spam. This change even help cross-group heal so it helps against monotonous gheal spam.
Mostly harmless
Top

'Fixing' rune/ritual's ability to trigger these tactics would be a substantial nerf, it should be left as is.
Ramlaen, Longhaul, Wolfnrock, Grashop
Top

Valarion wrote: ↑
Fri Aug 14, 2020 8:18 pm
The heal rituals were considered to be ground pulse heals in a fashion similar to the AoE damage skills of Rain of Fire/Pit of Shades which also do not proc.

I agree on the ritual changes being a nice advantage, when before only a few RPs (don’t have high Z myself so only this PoV) were able to outheal the common WP. It also opens up some spec possibilities with Armor/Absorb/AP proccing, although there’s not much use for AP ritual at all now.

Damage AoE is hard to compare because those also used to proc enemies’ stuff, so there has been some kind of trade-off here.


Ok I do play a dok and I'm curious. Plz explain how does dok gets ~2500 more armor than a zealot?

Yeah same, how much is there difference between top tier sets between those classes even?
WP has a useless Armor prayer and M1 for himself, while RP has proccing Armor increase and M2 (which no one uses thf).
Never argue with stupid people, they will drag you down to their level and then beat you with experience. (Mark Twain)
Top
Ads

Difference between Zealot and DoK in Sov is 1420 armor (read: DoK has exacly twice as much armor from gear).
Anathae [KotBS] / Anathea [WP] ( and couple others )
former Anathae [Zealot]
Top

Just let how it works right now, even when it I makes heal ritual the only viable option in large scale rvr.

But what if we would allowed to have all three rituals up at the same time with a minor change to an useless tactic? Yes, I am looking at you Waves of chaos and Swirling Vortex.
Panso 40/6x Zelot
Savory 40/5x Magus
Annot 40/6x WE
Top
Post Reply
37 posts

Users browsing this forum: No registered users and 10 guests